In 1957, Sri Prafulla Chakravarty spotted some ponds, Shivalingas and terracotta figures in the Bhaitbari area. Then in 1984, Sri Shivanand Sharma of Dhubri visited this area and wrote letters to the editor of The Assam Tribune stressing on excavation and preservation of the cultural heritage of the Garos and the Koch tribes. The importance of the site was emphasized only recently when the pre history branch of the Archaeological Survey of India undertook the initiative to scientifically conduct archaeological excavations in Meghalaya.

This excavation led by the Archaeological Survey of India stated that this place was one of the biggest cities during the pre-history period. After two months of work, it was revealed that Bhaitbari, which is located 235 kms west of Guwahati in the West Garo Hills district, was the capital of Kamrup in ancient times. The excavations revealed that there was a sprawling township of the amalgamation of Hinduism and Buddhism faiths.

A religious centre was cast out of the Brahmaputra valley from the 4th century A.D The town was located in the left bank of the Brahmaputra some 2000 years back. The township was well developed with a large number of temples and tanks on the banks. There is also evidence of existence of residential and palatial complexes in this township.

There are also excavations of a temple in the complex. The temple was located facing east and had beautiful terracotta tiles. The maximum length of the temple is 11 meters and the retaining wall is 2.22 meters wide. The wall ruins excavated were of brick rubble and there were also sightings of holes in the ruins which indicated a Puja mandap. The ruins give a good description of the presence of a well built temple.

The ruins also present a description of a decorated temple premises with terracotta tiles. These tiles have been fixed to the walls with the help of one or two holds lute to the back of the tiles. The tiles depict the figures of four armed Ganesha holding the parasu, mula and modak in three hands while another hand is fourth hand is in bhoomi sparsh mudra. There are also images of Tara in dhyan mudra, Kubera, Yaksha, Kali, Heruka, dancers and musicians playing instruments like the Mridanga. There is also a finding of a figure of Rama in the bow breaking mudra. 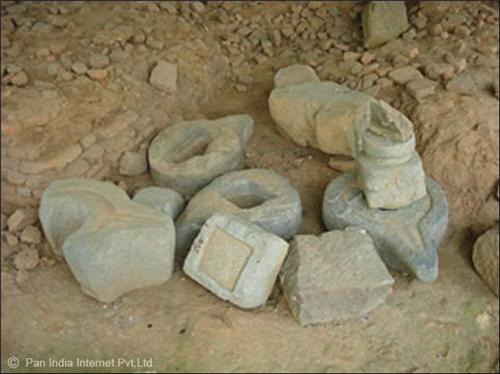 An anthropomorphic stone was also discovered on the southern side. The stylish terracotta tiles indicate the temple dates back to the 9th century A.D. the discovery of an engraved elevation model of a temple on a huge boulder in a nullah within the fortified area shows that the temple was probably a rekha-deul type with a sikara some six storey high. An octagonal Shiva temple was also excavated facing east. The ruins and the constructed method show that the temple was built in a commanding position overlooking the Brahmaputra towards the west and the Garo Hills towards the north and east. There were also steps leading to the temple.

The findings of the placement of the ruins are also extraordinary with a definite structure plan. The mud-cum-burnt bricks fortification runs some four to five kms in a circular fashion with a part of it extended along the left bank. The fortification has been built along the contour of the hills. Entrances, moat and raised structures have been found in the building structure.

Bhaitbari can be called as one of the greatest habitations on the east of the mighty river Brahmaputra. Evidence shows that this ancient township was destroyed and deserted when the Brahmaputra flooded the area after changing its course. The river Brahmaputra is now flowing ten kms away, near Dhubri. The excavation process is till going on in phases with findings and related ruins being discovered in Wadagokgre.