People and Customs of Tura

A'chik is the common title used for the various groups of people after the division of the race. The title is used to designate different groups such as the Atong, Akawe (or Awe), Ambeng, Chibok, Matchi,  Ruga, Chisak Megam or Lyngngam, Gara-Ganching who inhabit the greater share of the present Garo Hills District. Nevertheless, the name is also assigned to the groups of Garos that spread to the neighboring places in Assam, Nagaland, Tripura and Mymensing in Bangladesh.

However, the main feature of their traditional political setup, marriage systems, social institutions, religion and beliefs, inheritance of properties are common. It is observed that as these units were isolated from one another, they have developed their own patterns. They also speak different dialects. Also, their traditional songs, music, dances differ from each other. The song, music and dances are mostly connected with traditional religious functions and ceremonies.

The Family: Garos have a matrilineal society where children adopt the sirname of their mother. A simple pattern of Garo family consists of the husband, wife and children. The family expands with the marriage of the heiress, which is usually  the youngest daughter. The heiress is called Nokna and her husband Nokrom. The bulk of family property is given to the heiress. Other sisters receive parts and are also given the rights to use plots of land for cultivation and other purposes. The other daughters leave their homes with their husbands after their marriage to make their own family. This aspect of family structure remains the same even in urban areas.

The Garos recognize an heiress to family property from any of the daughters, where she is married to one of her father’s nephews, generally it's the most loved girl, submissive and well behaved one who succeeds to that title. There are few cases are also there where the heiress is married to a man outside her father’s clan. 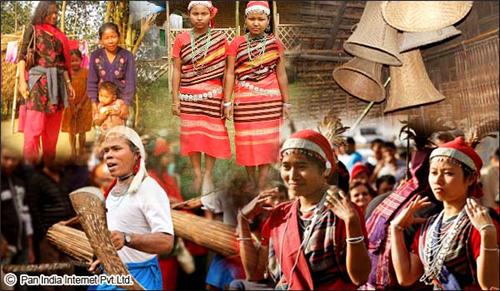 Household Utensils: The household utensils of the Garo's are simple and limited. They consists mainly of cooking pots, the pestle, large earthen vessels for brewing liquor and the mortal with which paddy is skinned. They also use bamboo baskets of different shapes and sizes for storing their grains.

Furniture:  The bamboo floor is generally enough for all their requirements. They have very limited furniture at home. The Garos also use a wooden stool made by themselves. In some houses, chairs made out of bamboo or cane, are used which are offered to the guest.

Weapons: Garos have their own weapons. One of their  principal weapons is the two-edges sword called Mil-am made out of one piece of iron form hilt to point. There is a rod between the hilt and the blade where attached a bunch of cow’s tail-hair. Other types of weapons are Spear, Bows and Arrows, shields, Axes, Daggers etc.

Marriage ceremonies differ according to customs and places. In Garo customs it is the girls who propose a match to boys. The Garo marriage is governed by two important laws, viz., Exogamy and A’kim where marriages are not allowed from different the same clan.In accord to the law of A’Kim, a man or a woman who is married cannot remarry a  person of another clan, even after the death of their partner. They have a custom of remarrying another wife/ husband from the same clan, in case their partner is dead.