Food and Costumes of Tura

The Garos being form the hilly place has all the attributes of the hilly people right form their food, drinks, culture, costumes, ornaments. The Garos love their tradition and culture, they maintain it till today.

People in tura have a very different food culture. They mainly like boiled food along with boiled vegetables. Rice is their sraple food. They also eat millet, maize, tapioca etc. Garos are very liberal in their food habits. 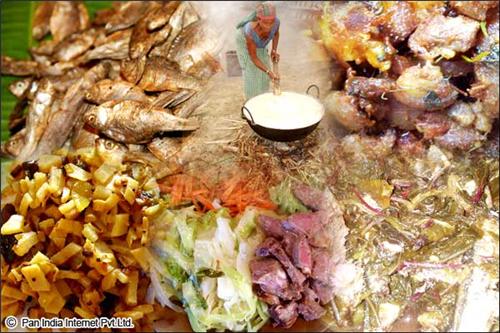 They mostly love meat. It is one of their favourite dish, usually the Garos do not eat their meal without any meat . It can be Chicken, beef, rear goats, pigs, fowls, ducks etc. and relish their meat. They also eat other wild animals like deer, bison, wild pigs etc. Sea food is also one of their everyday dish they eat a lot of Fish, prawns, crabs, eels and dry fish also are a part of their food.

The Jhum fields and the forests provide a number of vegetables and roots for curry but bamboo shoots are esteemed as a delicacy. They use a kind of potash in curries, which they obtained by burning dry pieces of plantain stems or young bamboos locally known as Kalchi or Katchi.

After they are burnt, the ashes are collected and are dipped in water and are strained in conical shaped in bamboo strainer. These days most of the town people use soda from the market in place of this ash water. Apart from other drinks country liquor plays an important role in the life of the Garos.

The people in the past were barely dressed. Due to different climatic conditions, the dress pattern varies from place to place. For example, those who are from Assam or Bangladesh prefer light textures while people in the hills need heavy clothing. Garos have cotton ginning, as cotton is the principal cash crop of the district.

The principal garment of the men is a strip of woven cloth about six inches wide and about six feet long. In the past, they wove these clothes, some of which were ornamented with rows of white beads made of conch-shells along the end of the flap. They also used vests of black color with lining at its ends. Garo women use an indigenous skirt known as Dakmanda and a body cloth. The men wear a turban on the head but the women use head-bands. 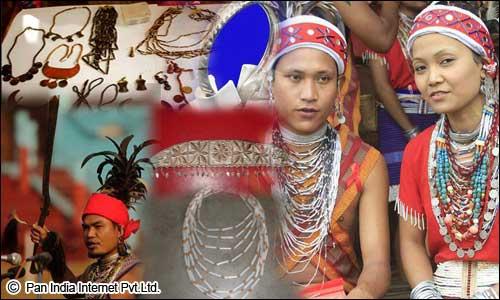 Both men and women enjoy adorning themselves with varieties of ornaments.